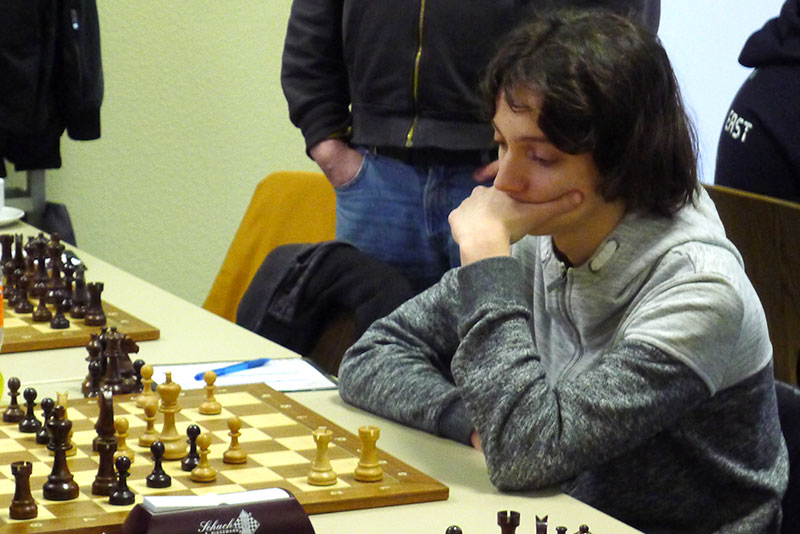 After the defeat against the SF Wiesental, uBu is on a relegation spot.
It simply runs lousy for the 1st team of the SC uBu. Against strong Wiesentaler only Mischa Rausch and Jürgen Lutz can win the full point. The performance of Mischa Rausch, who conquers an extrapawn and scores a wonderful victory against Hubert Amann (DWZ 1888), deserves special mention. Against this strong opponent the position requires precise play, that day everything is perfect with Mischa, congratulations!

After a longer absence Jürgen Lutz shows very good chess with Black against René Fischgräbe. He grabs the important d-pawn and breaks his opponent’s neck. Soon Jürgen will be playing at the Gibraltar Chess Festival, the victory is just right and should motivate him even more.

Furthermore, there is not much to be said, Klaus Brück with a quick draw against Hubert Heilig, is absolutely fine!

Moritz Kühner stands well, perhaps even on a win, but after some inaccurate moves the position flattens out and one agrees on a draw.

I am fine with the opening, but I fail to act energetically against Frank Rothardt. My opponent always finds the right answer, and in the end I throw in the towel.

Marcus Krug at 1 catches a pitch black day, has to spit his rook after a real blackout and gives up the game.

O-tone Sven Maciejewski at 6: I was simply outplayed.
I don’t see it that brute, at least he fights Jürgen Martus (DWZ 1812) for a good while until he admits defeat.

Thanks to Michael Bratsch, who compensates a retirement and against Heinz Martus simply pays apprenticeship money.

Maybe this new defeat will shake up the team, the many losses are a problem. Disappointing performance.