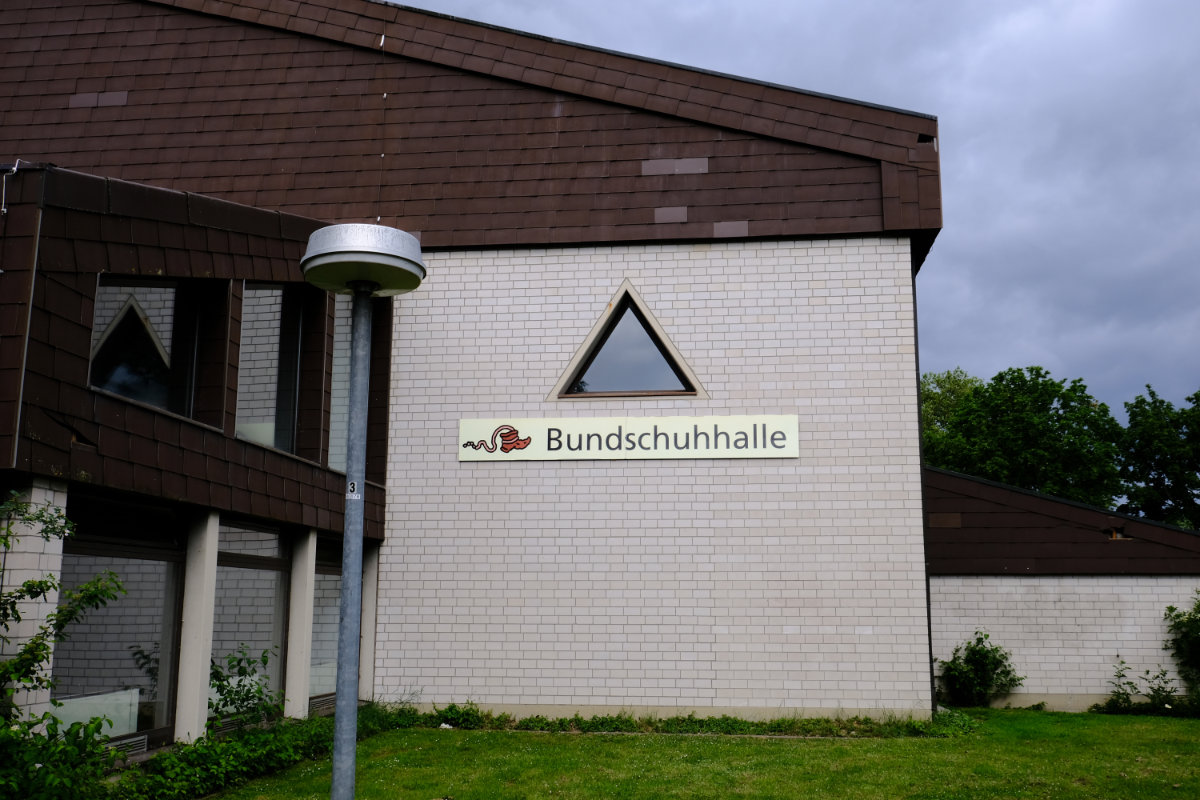 At the wish of the opponent, we postpone the encounter against Untergrombach 2 by one week.
A Ukraine charity tournament will take place on the official date.

The situation is clear.
For us it’s about the wooden spoon, for the opponent it’s about promotion to the Landesliga!
U-Bach is lining up accordingly.

On board 1 Andrej Sokerin has to deal with the extraordinarily strong Markus Krieger. With a DWZ of 2132, he is a real heavyweight. There’s a big board to be drilled!
Our man quickly comes under pressure, one of his bishops is an outsider, the opponent places an unpleasant knight in the enemy camp.
At some point, the opponent’s position is overwhelming. Sokerin gives up.
After the game there is still speculation about a exchange sacrifice, but that is all smoke and mirrors.

Jürgen Bräutigam goes to the dogs against Michael Noll on 7, unfortunately I can’t express it any other way.
After only a short time, the king perishes miserably in the field.
A classic case of “paying the price”. Bygones be bygones Jürgen. Drink it down somehow, beer or something.

On 5 Manfred Lachnit struggles with his game from the start.
À tempo his opponent counters almost every move. That is annoying. After a short time Lachnit has to throw in the towel. This happens.

Very nice the game of Moritz Kühner against Ralf Toth on board 6.
Excellent overview.
A lot of pressure in the kettle, but nevertheless a draw.
Maybe there was more possible for our man (pawn on e4 is the can opener). Against a strong +1700 player, however, it was completely okay!

Mischa plays a great game at 3 against Kay Hayen. It’s only a matter of time before his opponent finally raises the white flag.
But oh dear, oh dear, chess is so cruel. Deep in the cool cellar of chess combinations, Hayen suddenly uncorks a dusty bottle of Remis (Martin), damn it.
Even though it may feel like a defeat, dear Mischa, thank you for the beautiful game!

Preparation is everything. That’s why I sit down at the board at home and work on variations.
Marc Toth then serves me one that I’ve only had a brief look at, mea culpa.
I refrain from an advantageous pawn advance on the a-file.
That’s why there’s not much left after that.
I spit a pawn to somehow hold the position. Suddenly, as destiny would want it, there is a repetition of the position. Draw.

Marcus Krug plays Andre Hayen at 2. The young talent from Untergrombach achieved a brilliant stroke of genius a week earlier at the Ukraine Simultan with GM Yuri Solodovnichenko, a big surprise.
He defies the Ukrainian grandmaster for the only victory!

It was not to be enough against Krug. Right from the start our man exerts enormous pressure and finally bags a convincing victory.

Today, Marcus is carried by the golden wings of memory.
He was born in Untergrombach and celebrated his first successes there as an aspiring chess player.
We chit chat about old times during a short walk.

There is a football field where he used to have fun with other youngsters playing ball, we slowly walk by.
This morning, a small flock of storks populates the grounds. The beautiful birds are eating the worms and insects that are in abundance in the damp grass at this morning hour. A nice breakfast for the long-legged birds.

We loiter at the Bundschuhhalle on Joß-Fritz Street, where the team match is about to begin.

The street’s namesake – Joß Fritz – is a local rural leader who emerged around 1501 as the initiator of the Bundschuh movement. Unlike some other representatives of this group, he managed to escape. He then quickly instigated a conspiracy on the Upper Rhine before his trail was lost in Switzerland in 1525.

The Bundschuhhalle is a typical building from the 1980s. In the past, the building was simply called a “multi-purpose hall”.

Such architectural sins can be found in almost every shtetl.

In those days, these ugly, mostly soulless monster buildings were planted somewhere in the urban landscape. A clear case of eye cancer.
Nevertheless, the stuff was state of the art back then, it’s madness.

In the course of time, many of these formerly lively sports and event locations turned into dilapidated ruins of civilisation, ivy-covered, enchanted, lonely, forgotten, so-called lost places.
H.G. Wells sends his greetings.

The youth is having fun elsewhere.

At least, a brand-new ventilation system seems to indicate that the Bundschuhhalle still has something to offer today.
Our friendly guide interrupts the little walk and points to a window at a lofty height.

“From the parapet up there, the well-known German IM Rolf Schlindwein once leaned out too far, lost his grip and fell down. Miraculously, he did not lose a single hair.
Astonished spectators watched Schlindwein lying on the ground at the time, laughing very loudly, as if he had just tripped over his open shoelaces.”

The man was clearly in shock. Adrenalin was playing tricks on him.
Man needs at least one guardian angel!
Untergrombach 2 promotes
This is the penultimate matchday of the season.
We congratulate the Untergrombach team, not entirely without self-interest, on their promotion. You have earned it.
Thanks also to our team. We did well against these opponents! A little more luck and who knows…

Good kick-off of season for uBu 2